Every year since 2012, a committee working on behalf of Windsor High School has inducted a class into the school's hall of fame.

The Hall of Fame highlights and immortalizes all individuals who shined on the athletic field, classroom, as an administrator or staff member or as a Wizard booster within the community.

To nominate someone to the Windsor High School Hall of Fame, send an email to Kurt Hinkle at kurthinkle@gmail.com 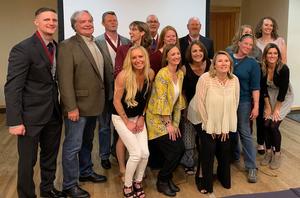 Windsor High School to Induct 2 Student-Athletes, 2 Icons of the Community & an Entire Team into 2019 Athletic Hall of Fame

The Windsor High School Athletic Hall of Fame recently announced the addition of two former student-athletes, a long-time coach and educator within the district, a community icon and the entire 1993-94 girls’ basketball team as new members to the school’s distinguished club.

In late 2018 the committee members unanimously voted to add the former WHS athletes and educators as its eighth induction class.

Those being enshrined into the hall are student athletes Kurt Duffy (Class of 1997), Josh Larson (Class of ’07), longtime educator and coach Gary Perko, community icon and 1986 graduate Bobby Warner and the 1993-94 state championship girls’ basketball team.

Duffy and Larson will be enshrined as student athletes while Perko will be honored with the Legacy Award for coaching and teaching and Warner as the Murray Kula “Spirit of the Wizard” Award. The 1993-94 girls’ basketball team is only the second full team to be inducted, and the first female team. Their induction will take place nearly 25 years to the date after they secured the Class 4A state championship.

Deb Neely was the head coach of the 1993-94 Class 4A state championship girls’ basketball team, a team that went 22-1 during the season and defeated Lamar 69-53 to win the title. It’s the only state championship won by the girls’ program at Windsor. She was assisted by Brent Carmichael and Mike Briggs.

While at WHS Duffy won eight varsity letters, but primarily dominated on football field and the track. He was all-state in football (1996) and in track and field (1996 and 1997). He was all-conference in football in 1995-96 and was the Greeley Tribune Football Athlete of the Year, as well as named to the All-Colorado Football Team. In 1996 he rushed for over 2,000 yards and the year before that set the school record in interceptions.

Upon graduating Duffy coached football for a year at the Air Force Academy Preparatory School, attended undergraduate pilot training, flew the F-15C Eagle at Lakenheath, England from 2004-07, flew the AT-38C at Vance Air Force Base in Oklahoma from 2007-09, flew the F-22 Raptor and T-38A at Holloman Air Force Base in New Mexico from 2010-13 and is currently an Oregon Air Force National Guard F-15C instructor pilot teaching at the world’s only F-15C school house.

He lives in Oregon with his wife, fellow 1997 WHS graduate Selena, and their four-year-old son Rohan.

The other WHS graduate who starred in the classroom and on the athletic fields and who also attended the Air Force Academy was Josh Larson. The 2007 graduate was a nine-time athletic letter winner and active in Student Council, choir, drama and a member of the National Honor Society.

Wrestling and football were Larson’s primary sports as he lettered all four years in each and was a central figure in his team’s successes. He qualified for the Class 4A state wrestling meet three times, finishing as a runner-up in 2006 and fifth place in 2007. He was a region champion, named allconference three times and all-state one season.

Larson was a two-time captain on the Wizard football team and a captain of the track team as a senior.

The 2006-07 Student Body Co-President served on Student Council for two years and was also a Colorado State Student Council Representative in 2006-07. He was also an eight-time academic all-state and a two-time academic all-state first team. At Air Force, Larson was a four-time varsity letter-winner, named to the Western Wrestling Conference Coaches Honor Roll, was the Class of 2011 Outstanding Cadet in Physical Education and the 2011 Cadet Wing Commander. He is currently stationed in Warner Robins, GA and lives with his wife Allison and their two sons, James and Benjamin. He is a captain in the Air Force and serves as a cyberspace operations officer.

The Murray Kula “Spirit of the Wizard” Award winner is longtime Windsor resident Bobby Warner. The 1986 WHS graduate has operated the Town of Windsor Parks and Recreation Department Athletics Division for the past 20 years, has served on the Weld RE-4 School Board and is currently the public address announcer for WHS football, basketball and baseball games.

Warner and wife Michele, a 1987 WHS graduate, have two children, who also graduated from Windsor, and a three-year-old grandson Kane.

Lastly is the Legacy Award winner, Gary Perko. The longtime Windsor educator and coach taught mostly science for 31 years at Windsor Middle School and retired from teaching in 2006. From 1999-2008 he was the head football coach for the WMS eighth grade team where he amassed a record of 70-8. From 2010-15 he took over the Severance Middle School seventh and eighth grade football teams where he went 76-12. Football wasn’t the only sport he coached.