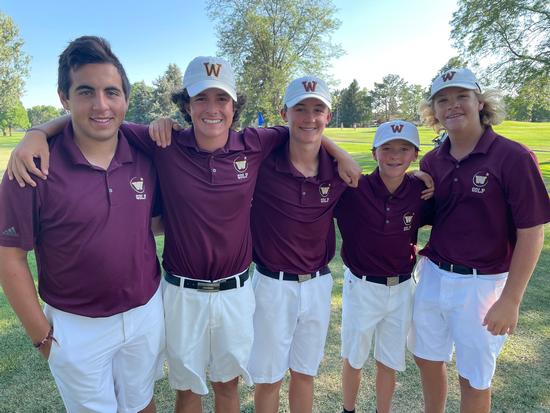 The smiles continue for the Windsor High School boys' golf team after winning yet another tournament today. The Wizards won their fourth varsity event of the year, their second Northern Colorado Athletic Conference event, when it captured the Greeley West conference match at Highland Hills Golf Course in Greeley. Windsor's four-man score of 304 (20-over) was two strokes better than rival Silver Creek and kept the team at the top of the conference standings. Windsor was paced by junior Landon Ball's second place score of 73 (2-over). It was Ball's fourth-straight sub-74 round and improved his stroke average to 75. Behind Ball was senior Brentyn Paiz (76.67 stroke ave.) who fired a 74 (3-over) to tie for third. Junior Carter Hinkle (75.17 stroke ave.) finished sixth with a score of 77 (6-over). Freshman Kellen Ball (77.83 stroke ave.) tied for 11th with a score of 80 (9-over), and sophomore Ethan Tippets (82 stroke ave.) finished in 19th place with a score of 84 (13-over).